Philosopher's Index (EBSCO)
Provides indexing and abstracts to the scholarly literature in philosophy. Includes citations to journal articles, books, book chapters, and contributions to anthologies. International and interdisciplinary in scope; coverage is from 1940 to the present.

Art Full Text (EBSCO)
Indexes the contents of academic journals and magazines in the fields of fine and decorative arts, architecture, and photography. Includes citations for dissertations, book reviews, and art reproductions published in indexed journals. Abstracts are available back to 1984 with selective full text available back to 1995.

Art Index Retrospective: 1929-1984 (EBSCO)
Indexes the contents of academic journals and magazines in the fields of fine and decorative arts, architecture, and photography. Includes citations for dissertations, book reviews, and art reproductions published in indexed journals.

MLA International Bibliography (EBSCO)
Provides citations to journal articles, books, book chapters, and dissertations on all aspects of literature, language and linguistics, literary theory and criticism, dramatic arts, and folklore. International in scope; coverage from 1926 to the present. Includes access to the MLA Directory of Periodicals.

Project Muse
Provides full-text access to books and journals in the arts, humanities, and social sciences.

Here is a map showing where the DVD collection is located in Falvey West: 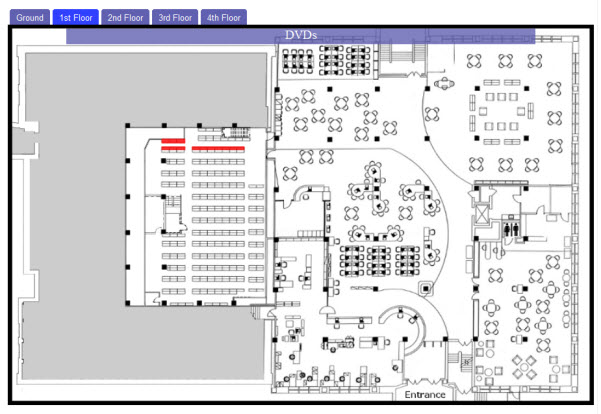 Stanford Encyclopedia of Philosophy
An open-access encyclopedia started by the Stanford University Philosophy Department in 1997. The peer-reviewed entries are continually updated and contain bibliographies.

Routledge Encyclopedia of Philosophy (REP) Online
Web access to the 10-volume print encyclopedia, published in 1998 with quarterly updates. Note that this encyclopedia uses British spellings, such as 'armoury,' 'colour' and 'theatre.'

Cambridge Companions to Philosophy, Religion and Culture
The Cambridge Companions series offers specially-commissioned collections of essays which are intended to serve as reference works for an inter-disciplinary audience of students and non-specialists. Addressing topics and figures ranging from Plato through Kant to Habermas, and philosophical movements such as the Scottish Enlightenment and German Idealism, this online collection contains over 1100 downloadable essays taken from the Cambridge Companions to Philosophy, Religion and Culture (more than 100 volumes). Each volume also includes a substantial bibliography and other elements such as glossaries and timelines.

Chicago Manual of Style Online
The 17th edition of the Manual is the most current. The online version includes a Citation Quick Guide with examples. The Library's website offers a short introduction and overview to the Notes and Bibliography System commonly used in the humanities.