The Unsustainability of Subscription Publications

For centuries, scholarly and science publishers have provided a vehicle for academics to share their work widely. In more recent decades, journals have incorporated a peer reviewed structure that has entrenched these publications as a vital source of information for those interested in advancing ideas and science. The first half of the 20th century saw great prosperity for academic publishing companies, who grew and merged into a handful of powerhouses (Elsevier, Wiley, Springer, Baker & Taylor). They controlled the market, what was published, and how content was accessed. In the second half of the 20th century, beginning in the 1970's, two crises emerged that would become the catalyst for the Open Access movement. 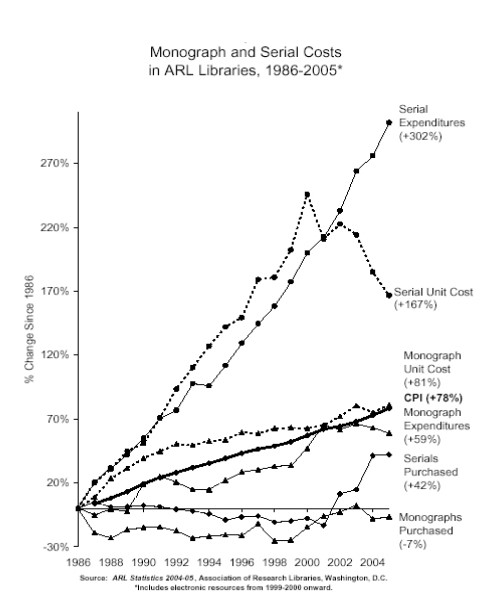 The Serials (or Pricing) Crisis and Permissions Crisis

Since the 1970's journal prices have steadily and rapidly increases, outpacing inflation. The chart above shows the rise of book and journal costs from 1986-2003. These skyrocketing journal prices funded by stagnant library budgets created an unsustainable ecosystem.

In addition, the internet was flourishing with digitization taking root. The speed in which users expected information changed rapidly. Ease of use became a necessity, and yet publishers responded with restrictions that would slow the speed of access and create new barriers for reuse. Publishers created new systems for controlling and monetizing digital content in the form of paywalls and increased rights restrictions. Unlike physical content, for the most part, digital content is restricted accoding to IP range and number of users and is subject to yearly subscriptions (including for back content) and journal bundling. This has resulted in exorbitant fees that eat into library budgets and largely flipped the collections model from purchasing content to renting collections.

In 2014, Harvard University Libraries famously bucked the publishers and their expensive journal prices, claiming they could no longer sustain the subscriptions, given their more limited budgets.

"I hope that other universities will take...action. We all face the same paradox. We faculty do the research, write the papers, referee papers by other researchers, serve on editorial boards, all of it for free...and then we buy back the results of our labour at outrageous prices...The system is absurd, and it is inflicting terrible damage on libraries. One year's subscription to The Journal of Comparative Neurology costs the same as 300 monographs."