The Library owns a selection of full text newspaper archives. A wide range of magazines are indexed in the two Readers' Guide databases listed below. Articles discovered with the help of these indexes can be requested through interlibrary loan.

Included below are instructions on how to discover newspapers and magazines in the Library's collection.

Access World News (NewsBank)  Tutorial
Provides full text access to national and international newspaper articles and radio and television news transcripts. Many newspapers, including the Philadelphia Inquirer, offer full-image “page view” format. Includes user-friendly subject browse feature, as well as full text searchability. Coverage varies.
A tutorial for this resource can be found at: https://infoweb.newsbank.com/apps/news/sites/default/files/assets/newsbank-help-documentation.pdf
Nexis Uni  Limitations on Use
Formerly known as LexisNexis Academic. Provides full text access to national and international newspaper and magazine articles and news transcripts, business, company, and industry information in the U.S. and abroad, and legal documents, including U.S. Federal and State court cases, and law reviews. Coverage varies.
Limitations on Use:
LexisNexis online services and the materials contained therein are under copyright by LexisNexis. All rights reserved. No part of these Services may be used except for research purposes, and the Services may not be reproduced, stored in a retrieval system, or transmitted in any form or by any means, electronic, mechanical, photocopying, recording or otherwise without the prior written permission of the LexisNexis Academic Library Solutions. Materials retrieved from the Services may not be duplicated in hard copy or machine-readable form without the prior written authorization of LexisNexis Academic & Library Solutions, except that limited reproduction of output is permitted solely for individual use by the Authorized User or internal distribution within the Subscribing Institution in accordance with the terms of this Agreement unless further limited or prohibited by the Copyright Act of 1976. Under no circumstances may the Materials or any portion thereof be used to create derivative products or services.
MideastWire.com
Offers translations of selected news from 22 Arab countries and the Arab diaspora.

Middle Eastern and North African Newspapers (East View)
Features archives of selected Middle Eastern and North African newspapers spanning from the second half of the 19th century to the early 20th century. Most newspapers are written in Arabic but a few English, French, and bilingual editions are included. Over a third of the titles are from Syria. Lebanese newspapers are also strongly represented. The remaining titles are from Iraq, Egypt, Algeria, Saudi Arabia, Morocco, and Palestine. Most of the collection consists of out-of-copyright, orphaned content, but five subscription titles, which are not available to the Villanova community, are also included. Use the Arabic keyboard to enter search terms in Arabic. Search results appear in image and text format. Open access is made possible through the generous support of the Center for Research Libraries and its member institutions.

Library of Congress subjects facilitate the discovery of unknown news sources that match a set of criteria. Looking up an already known newspaper or magazine is a good way to start. For example, a title search for Al-Quds al-'Arabi in WorldCat will retrieve multiple records for this newspaper. Click on the first match to open the full record to see the Library of Congress subjects assigned to this newspaper. 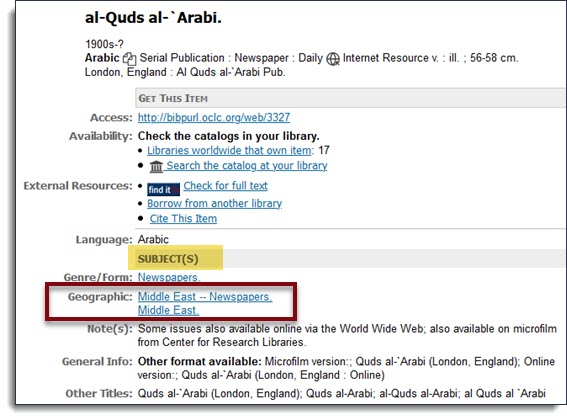 Click on the "Middle East -- Newspapers" subject and on the Serials tab on the results page. This will generate a list of over 200 Middle Eastern newspapers, some in English, many in Arabic, and some in other languages. Limited runs of newspapers can often be requested through interlibrary loan if a microfilm copy is owned by a US library.