The Library owns a wide variety of newspaper and magazine archives. A range of magazines are indexed in the two Readers' Guide databases listed below. Articles discovered with the help of these indexes can be requested through interlibrary loan.

Included below are instructions on how to discover additional newspapers and magazines in the Library's collection and beyond.

New York Times (NYTimes.com)  Access Instructions
Offers access to all sections of the NYTimes.com website without monthly limits. Coverage from 1851 to present, with limited availability of articles from 1923-1980. For full text access to all NYT content except the most recent five years, use ProQuest Historical Newspapers.
Subscription courtesy of the Provost's Office and Falvey Memorial Library.
Users are required to create an individual account in order to access the NYT from off-campus or via mobile app. Create your account at AccessNYT.com. Download mobile apps from nytimes.com/mobile. Once your account is created, you can use it to log on to NYTimes.com from anywhere with full access. Your institutional affiliation must be confirmed once a year at AccessNYT.com
New York Times: 1851- (ProQuest Historical Newspapers)
Provides full text access to the complete New York Times archive except for the most recent five years. Use NYTimes.com, Nexis Uni, or ABI/INFORM for access to current content.

Alternative Press Index (EBSCO)
Provides citations with selected abstracts to articles published in alternative and often marginalized journals, newspapers, and magazines. Coverage is international and interdisciplinary. Covers 1991 to the present.

American Indian Newspapers (Adam Matthew Digital)
Sourced from the Sequoyah National Research Center (University of Arkansas at Little Rock) and the Newberry Library in Chicago, this newspaper archive covers nearly two hundred years of American Indian history in North America from 1828 to 2016 and offers American Indian perspectives on federal and tribal politics, self-representation, environmental activism, the American Indian Movement, tribal schools and colleges, and many other topics. It also features a series of topical essays.

Alternative Press Index (EBSCO)
Provides citations with selected abstracts to articles published in alternative and often marginalized journals, newspapers, and magazines. Coverage is international and interdisciplinary. Covers 1991 to the present.

LGBT Magazine Archive (ProQuest)
Provides full text access to the most influential LGBT+ news resources including The Advocate (full coverage from its inception in 1967), The Pink Paper, Just for Us, The Albatross, and the notable UK publications Gay News and Gay Times.

Library of Congress subjects facilitate the discovery of news publications. Looking up an already known newspaper or magazine is a good way to start. For example, a title search for Middle Earth, one of the many short-lived counterculture newspapers of the 1960s, will retrieve multiple records. Click on the first match to open the full record. The record will have multiple Library of Congress subjects. The generic "Newspapers" is not very helpful but a search that combines the subjects "Underground newspapers" and "Newspapers" will focus search results and produce a list of alternative news media. Alternatively use the Serials limit on the search form. Note that a simple subject search for "Underground newspapers" without the use of the Serials limit will generate a list that includes books about the alternative press. 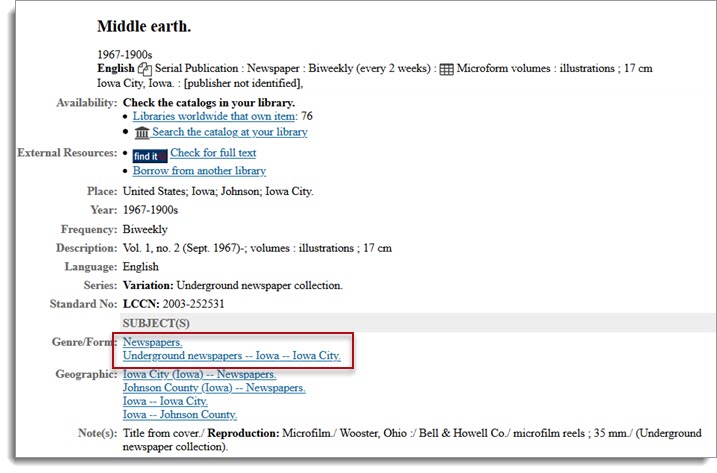 Subjects in WorldCat records are hyperlinked and call up all records with the same subject. "Underground newspapers -- Iowa -- Iowa City" generates a short list which includes only two titles: The Iowa City Oppressed Citizen and Middle Earth. To broaden your search go back to the search page and delete "Iowa" and "Iowa City" from the search boxes. This will expand the results list to over 400 matches including such papers as the Black Panther, Kudzu, and the Baltimore Free Press. Most of these papers are not available at Villanova University but you may be able to request copies through interlibrary loan. While libraries generally do not loan print issues of newspapers to other libraries, they often share microfilm reels. Limit search results to microform and check to see whether the microfilm is held by a US library, then submit an interlibrary loan request.

Keep in mind the ephemeral nature of many alternative newspapers and magazines. They often started as self-published newsletters and only a few graduated to regular publication schedules and established media distribution channels. The number of libraries that have copies of these newspapers and magazines are limited which may make them difficult to locate. Databases such as The Alternative Press Index (see above) are often the best way to get started.