Access World News (NewsBank)  Tutorial
Provides full text access to national and international newspaper articles and radio and television news transcripts. Many newspapers, including the Philadelphia Inquirer, offer full-image “page view” format. Includes user-friendly subject browse feature, as well as full text searchability. Coverage varies.
A tutorial for this resource can be found at: https://infoweb.newsbank.com/apps/news/sites/default/files/assets/newsbank-help-documentation.pdf
Nexis Uni  Limitations on Use
Includes among others a large selection of national and international newspaper and magazine articles and news transcripts. Coverage varies.
Limitations on Use:
LexisNexis online services and the materials contained therein are under copyright by LexisNexis. All rights reserved. No part of these Services may be used except for research purposes, and the Services may not be reproduced, stored in a retrieval system, or transmitted in any form or by any means, electronic, mechanical, photocopying, recording or otherwise without the prior written permission of the LexisNexis Academic Library Solutions. Materials retrieved from the Services may not be duplicated in hard copy or machine-readable form without the prior written authorization of LexisNexis Academic & Library Solutions, except that limited reproduction of output is permitted solely for individual use by the Authorized User or internal distribution within the Subscribing Institution in accordance with the terms of this Agreement unless further limited or prohibited by the Copyright Act of 1976. Under no circumstances may the Materials or any portion thereof be used to create derivative products or services.
Articles & More Search
Search all the Library's electronic collections in all disciplines simultaneously. Use the News and/or the Magazine filter to focus search results.

Eighteenth Century Journals (Adam Matthew Digital)  Limitations on Use
Features journals and newspapers published between 1685 and 1815 in England, Scotland, Ireland, Jamaica, and British India. Topics covered are wide-ranging and include colonial life, provincial and rural affairs, the French and American revolutions, reviews of literature and fashion, political debates, and London coffee house gossip.
Limitations on Use:
This database and the information in it is protected by copyright. (1) Authorised Users must comply with all applicable laws in using the Licensed Materials; (2) the Licensed Materials being supplied are only for the Authorised User's personal use; (3) reproduction or distribution of Licensed Materials that violates applicable law is prohibited (4) all Intellectual Property and other rights in the Licensed Materials is retained by the licensor.
Times of India (1838–2010) (ProQuest Historical Newspapers)
Provides access to all available issues of The Bombay Times and Journal of Commerce (1838–1859), The Bombay Times and Standard (1860–1861), and The Times of India (1861–2010). Founded in 1838 to serve the British residents of West India, the collection offers searchable full text back to the first issues and includes full page and article PDFs. Earliest issues may vary in text clarity.

Southeast Asian Newspapers (East View)
Offers over a hundred newspapers published in Indonesia, Cambodia, Myanmar, the Philippines, Thailand, and Vietnam between 1831 and 1958. Most of these news publications were short-lived and the archive will then only include a few years’ worth of issues. The newspapers were produced in a range of Southeast Asian languages including Filipino, Indonesian, Javanese, Vietnamese, Khmer, and Thai. Newspapers in Arabic, French, English, Spanish, and Dutch make up a small part of the collection. A quick search for independence retrieves matches for various forms of the word such as the Spanish independencia and the French inédependance. Most of the newspapers in the archive can only be browsed as the search interface only permits searches for words using the Roman alphabet. Open access is made possible through the generous support of the Center for Research Libraries and its member institutions.

Late Qing and Republican-Era Chinese Newspapers (East View)
Features nearly 300 Chinese newspapers spanning the period from 1911 to 1949. The collection should be explored through browsing as it lacks a Chinese character keyboard. Search results are limited to ads and names that use the Roman alphabet. Newspapers from more than 20 major cities are included covering most regions of mainland China. Open access is made possible through the generous support of the Center for Research Libraries and its member institutions.

Library of Congress subjects facilitate the discovery of unknown news sources that match a set of criteria. Looking up an already known newspaper or magazine is one way to start. For example, a title search for China Daily will retrieve multiple records for this newspaper. Click on the first match to open the full record to see the Library of Congress subjects assigned to this newspaper. 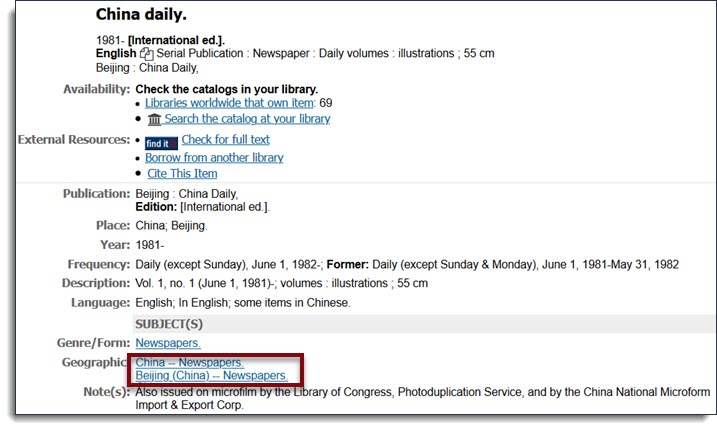 Click on the "Beijing (China) -- Newspapers" subject and on the Serials tab on the results page. This will generate a list of over 300 newspapers that either currently circulate in Beijing or have circulated there in the past, some are published in English, most in Chinese, and some in other languages. The hyperlinked subject for "China -- Newspapers" pulls up more than 3,000 newspaper records.

The WorldCat search interface offers a selection of helpful features including language and format restrictions. Matching records are ranked by the number of libraries worldwide that have full or partial runs of the publication in their collection. China Daily is held by nearly 70 libraries worldwide making it the second highest ranked Beijing daily in WorldCat. Only the People's Daily is held by more libraries but it is a Chinese language newspaper. While WorldCat lays claim to a worldwide network of libraries, English-speaking countries dominate the catalog which explains why an English language Chinese daily ranks in second place.

WorldCat records will include links to online editions of newspapers if they are freely available. While libraries generally do not loan print issues of newspapers to other libraries, they often share microfilm reels. Limit search results to microform and check whether the microfilm is held by a US library, then submit an interlibrary loan request.

The same approach can be used to discover magazines. The Library of Congress subject for magazines is "periodicals." A search for "India" and "Periodicals" in WorldCat retrieves over 26,000 matching records. Most of the periodicals are academic journals. The subject "Periodicals" is used for academic journals as well as for popular magazines. Narrowing the search by adding additional subject terms will make the list more manageable. A search for "Fashion -- India -- Periodicals" retrieves fewer than fifty matching records among them Woman's Era, an Indian fashion magazine that is published in New Delhi.