The Library owns some Irish and Irish American newspaper and magazine archives in digital and microfilm formats. Selected titles are listed below.

Included below are also instructions on how to discover additional Irish and Irish American newspapers and magazines in the Library's collection.

Irish Times (ProQuest Historical Newspapers)
Presents a complete archive of the Irish Times back to 1859 (except for the most recent two years) and the Weekly Irish Times (1876-1958).

Factiva (Dow Jones)
Provides access to international, national, and local news sources. Many different news media such as newspapers, magazines, wires, blogs and transcripts are aggregated in English and foreign languages. The content is current and archival with archives going back several decades. Includes The Irish Examiner, The Irish Independent, The Belfast Telegraph, The Irish News, The Irish Times, and many more.

Nexis Uni  Limitations on Use
Formerly known as LexisNexis Academic. Provides full text access to national and international newspaper and magazine articles and news transcripts. Coverage varies with archives going back several decades. Includes The Irish Examiner, The Irish Independent, The Belfast Telegraph, The Irish News, The Irish Times, and many more.
Limitations on Use:
LexisNexis online services and the materials contained therein are under copyright by LexisNexis. All rights reserved. No part of these Services may be used except for research purposes, and the Services may not be reproduced, stored in a retrieval system, or transmitted in any form or by any means, electronic, mechanical, photocopying, recording or otherwise without the prior written permission of the LexisNexis Academic Library Solutions. Materials retrieved from the Services may not be duplicated in hard copy or machine-readable form without the prior written authorization of LexisNexis Academic & Library Solutions, except that limited reproduction of output is permitted solely for individual use by the Authorized User or internal distribution within the Subscribing Institution in accordance with the terms of this Agreement unless further limited or prohibited by the Copyright Act of 1976. Under no circumstances may the Materials or any portion thereof be used to create derivative products or services.
Ethnic NewsWatch (ProQuest)
Offers access to the full text of articles from newspapers, magazines, and journals of the ethnic, minority, and native press. While most of the content is in English, some content in non-English languages is included. Coverage for most newspapers and magazines goes back to the early 1990s, but earlier content is also available. Includes The Irish Voice, The Boston Irish Reporter, and Irish America.

British Library Newspapers (Gale)
Includes over 160 newspaper titles, and spans the years of 1732 to 1950 over five distinct collections. Illuminating diverse and distinct regional attitudes, cultures, and vernaculars, providing an alternative viewpoint to the London-centric national press. Includes the Belfast Morning News, the Belfast News Letter, the Cork Examiner, and the Freeman's Journals.

Burney Collection Newspapers: Seventeenth-Eighteenth Century (Gale)
Features the newspapers and news pamphlets gathered by the Reverend Charles Burney (1757-1817), representing the largest single collection of 17th and 18th century English news media. Includes the Irish Monthly Mercury and The Votes of the House of Commons of Ireland, both published in London.

Irish Times (ProQuest Historical Newspapers)
Presents a complete archive of the Irish Times back to 1859 (except for the most recent two years) and the Weekly Irish Times (1876-1958).

Radical Newspapers, 1886-1939 (Irish Newspaper Archive)
Presents digital archives of more than 100 newspapers, bulletins, and pamphlets covering a broad sweep of nationalist, republican, feminist, and socialist publications. Many of the newspapers and bulletins in the collection were short-lived and the archive may hold only a handful of issues.
Funded with support from the College of Arts & Sciences and the Irish Studies Program.

The Irish Press (Philadelphia, 1918-1922)
This weekly newspaper was dedicated to Irish nationalism and to topics of interest to Irish-Americans. It was founded by Joseph McGarrity and published in Philadelphia from March 23, 1918 to May 6, 1922.

Times (London) Digital Archive, 1785-2012 (Gale)
Provides access to the archive of the Times of London from its inception through about five years ago.

American Periodicals (ProQuest)
Provides access to the full text of American magazines and journals published from the colonial period to the early 20th century. Includes The Irish Shield. A Historical and Literary Weekly Paper (Philadelphia, 1829-1831).

British Periodicals (ProQuest)
Provides access to British periodicals published from the 17th through the early 20th century with the majority of content from the 19th century. Covers a broad range of topics. Includes among other titles the Irish Magazine, and Monthly Asylum for Neglected Biography, The Celtic Magazine, The Dublin Saturday Magazine, Duffy's Hibernian Magazine, and The Irish Catholic Magazine.

Library of Congress subjects facilitate the discovery of unknown news sources that match a set of criteria. Looking up an already known newspaper or magazine is a good way to start. For example, a title search for The Irish Times  will retrieve a record with the subject: Dublin (Ireland) -- Newspapers. 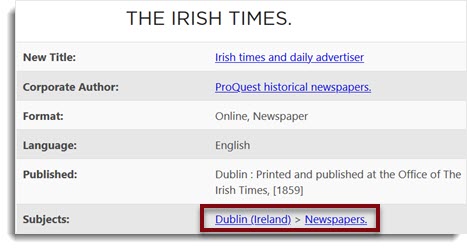 The same approach can be used to discover magazines. The Library of Congress subject for magazines is "periodicals." A subject search for Ireland -- Periodicals in Falvey's catalog retrieves close to 400 records among them The Irish Penny Journal, The Gael, and Duffy's Irish Catholic Magazine. Some of the periodicals on the list are academic journals such as The Journal of Irish Literature. The subject "periodicals" is used for magazines as well as for academic journals.