The Library owns a selection of full text newspaper archives. A wide range of magazines are indexed in various databases. Articles discovered through a database or other reference can be requested through interlibrary loan.

Included below are instructions on how to discover newspapers and magazines in the Library's collection.

Access World News (NewsBank)  Tutorial
Provides full text access to national and international newspaper articles and radio and television news transcripts. Many newspapers, including the Philadelphia Inquirer, offer full-image “page view” format. Includes user-friendly subject browse feature, as well as full text searchability. Coverage varies.
A tutorial for this resource can be found at: https://infoweb.newsbank.com/apps/news/sites/default/files/assets/newsbank-help-documentation.pdf
Ethnic NewsWatch (ProQuest)
Offers access to the full text of articles from newspapers, magazines, and journals of the ethnic, minority, and native press. While most of the content is in English, some content in non-English languages is included. Coverage for most newspapers and magazines goes back to the early 1990s, but earlier content is also available. Includes articles from a wide range of Latino news outlets such as La Opinión (Los Angeles), El Nuevo Herald (Florida), and El Diario (New York).

Nexis Uni  Limitations on Use
Includes among others a large selection of national and international newspaper and magazine articles and news transcripts. Coverage varies.
Limitations on Use:
LexisNexis online services and the materials contained therein are under copyright by LexisNexis. All rights reserved. No part of these Services may be used except for research purposes, and the Services may not be reproduced, stored in a retrieval system, or transmitted in any form or by any means, electronic, mechanical, photocopying, recording or otherwise without the prior written permission of the LexisNexis Academic Library Solutions. Materials retrieved from the Services may not be duplicated in hard copy or machine-readable form without the prior written authorization of LexisNexis Academic & Library Solutions, except that limited reproduction of output is permitted solely for individual use by the Authorized User or internal distribution within the Subscribing Institution in accordance with the terms of this Agreement unless further limited or prohibited by the Copyright Act of 1976. Under no circumstances may the Materials or any portion thereof be used to create derivative products or services.
Articles & More Search
Search all the Library's electronic collections in all disciplines simultaneously. Use the News and/or the Magazine filter to focus search results.

Independent and Revolutionary Mexican Newspapers (East View)
Features nearly 1,000 newspapers from Mexico’s pre-independence, independence, and revolutionary periods (1807-1929). The newspapers are predominantly in Spanish but a few French, English, and German language titles are also included. While holdings for many of the newspapers featured in this collection are available only in short runs, the titles are often unique and, in many cases, represent the only existing record of a newspaper’s short-lived publication. Digitized based on archival newspaper holdings of the Nettie Lee Benson Latin American Collection (University of Texas at Austin). Open access is made possible through the generous support of the Center for Research Libraries and its member institutions.

Library of Congress subjects facilitate the discovery of unknown news sources that match a set of criteria. Looking up an already known newspaper or magazine is one way to start. For example, a title search for La Prensa will retrieve multiple records for this newspaper. Click on the first match to open the full record to see the Library of Congress subjects assigned to this newspaper. 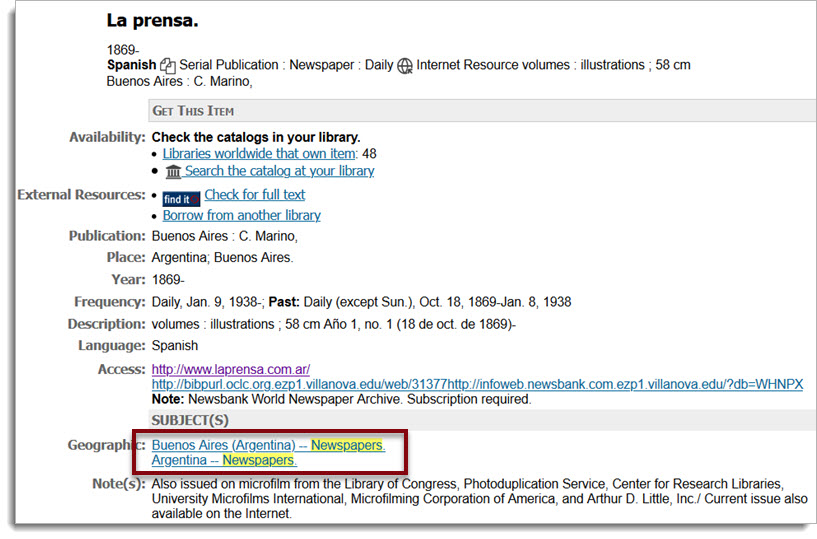 Click on the "Buenos Aires (Argentina) -- Newspapers" subject and on the Serials tab on the results page. This will generate a list of nearly 300 newspapers that either currently circulate in Buenos Aires or have circulated there in the past, some are published in English, most in Spanish, and some in other languages. The hyperlinked subject for "Argentina -- Newspapers" pulls up close to 500 newspaper records.

The WorldCat search interface offers a selection of helpful features including language and format restrictions. Matching records are ranked by the number of libraries worldwide that have full or partial runs of the publication in their collection. La Prensa is held by nearly 50 libraries worldwide making it the highest ranked Buenos Aires daily in WorldCat. ahead of La Nación. While WorldCat lays claim to a worldwide network of libraries, English-speaking countries dominate the catalog and Argentinian library holdings are not accurately reflected in WorldCat.

WorldCat records will include links to online editions of newspapers if they are freely available. While libraries generally do not loan print issues of newspapers to other libraries, they often share microfilm reels. Limit search results to microform and check whether the microfilm is held by a US library, then submit an interlibrary loan request.

The same approach can be used to discover magazines. The Library of Congress subject for magazines is "periodicals." A search for "Cuba" and "Periodicals" in WorldCat retrieves over 4,000 matching records. Most of the periodicals are academic journals. The subject "Periodicals" is used for academic journals as well as for popular magazines. Narrowing the search by adding additional subject terms will make the list more manageable. A search for "Women -- Cuba -- Periodicals" retrieves less than thirty matching records among them Minerva: Revista Quincenal Dedicada a la Mujer de Color, a Cuban women's magazine published from 1888 to 1915 that Falvey owns in microfiche format.