Finding a Specific Newspaper or Magazine

Finding a newspaper or magazine in a library catalog can be surprisingly difficult. Take the Times of London for example. Its official title is simply The Times, a short and rather common name that it shares with many other newspapers. Unfortunately, library catalog records do not include cross references to popular titles such as Times of London or Time Magazine, but they do include publication information such as Library of Congress subjects which often list the country, state, or city in which a newspaper is distributed. 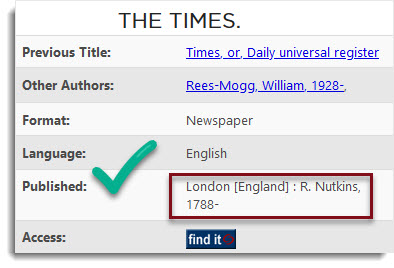 Taking advantage of the Journal Title search option in the Library’s search menu will dramatically reduce the number of matching results. A closer look at individual records will be occasionally necessary to clear up any remaining questions. Here are snippets of three catalog records for periodicals with the name Times. Note that the record to the right and the one on the left below are both records for the Times of London. However, the one below links to a British newspaper archive that only includes issues from the 17th and 18th century. Only the record on the right links the reader to the complete archive of the Times. The third record is for a Salt Lake City (Utah) newspaper with the same name. In cases like this, it can be necessary to visit the online archive to fully understand available local holdings. Use the link or button provided in the "Access" field of the catalog record.

Luckily, in most cases the Library’s Full Text Finder brings together all locally available online archives of a publication.

Not all newspapers and magazines have a digital archive and not all digital archives are available through the Library. Consult with a librarian about the availability of digital archives or visit one of the websites listed below. Some online archives permit searching free of charge but block access to the full text of articles. Consider interlibrary loan requests for articles discovered in this manner.

The magazine Liberator published from 1918 to 1924 is a helpful case study on how to locate digital archives. Initial investigations reveal that multiple periodicals share this name. Falvey’s catalog alone has four records for serials with the title Liberator. Three of these records are for the widely known abolitionist weekly established in 1831 by William Lloyd Garrison which is available in three different digital archives. The fourth record is for an African American newspaper published in New York from 1929 to 1932. The US Newspaper Directory maintained by the Library of Congress lists a total of sixteen newspapers with the title Liberator. However, the Directory does not cover magazines and hence does not list the magazine Liberator. Wikipedia, easy to find but alas less comprehensive, has articles about many newspapers and magazines. These articles typically cover a publication’s history including its impact, audience, and major controversies. They may also feature links to freely available digital archives. Disambiguation pages, such as the one for the Liberator, help to distinguish between various publications with the same name. Wikipedia’s Liberator article lists two freely available digital archives for the magazine: one maintained at New York University Libraries and one published by the Marxist Internet Archive.

Some newspaper and magazine archives are only available in print or on microfilm. Check the Library's catalog first for local availability. Next, consult WorldCat (see link below) to determine whether the periodical in question has been microfilmed. Microfilm of newspapers and magazines may be requested through interlibrary loan. Library staff is available to assist with this process. Most libraries will lend a limited number of microfilm reels at a time. The microfilm can be consulted with the Library’s state-of-the-art microfilm reader which has email and download functionality.

Falvey Library Catalog
Select Journal Title and enter the title of a newspaper or magazine.

Journal Finder
Locate newspapers and magazines that are available in digital format.

Wikipedia
Consult Wikipedia articles on specific newspapers and magazines to discover freely available archives and to learn more about the agenda and audience of a publication.

WorldCat (FirstSearch)
Select Title in the search menu and limit search results to Serial Publications. Take advantage of other search limits such as Microform format and Internet Resources.