Identifying Newspapers and Magazines of Interest

Researchers are often interested in the readership and mission of individual news sources when selecting primary sources for a project. They may be looking for specific readership characteristics such as gender, race, ethnicity, age, or religion. Chronological and geographic coverage, publication frequency, and preservation and accessibility of sources are other important factors. Scholars are generally familiar with one or two titles that match their interests but need a more comprehensive sample for their project.

Here are some suggestions on how to discover newspapers and magazines that match certain characteristics. Contact library staff if you have questions or require assistance.

The same approach can be used to discover magazines. A title search for Godey’s Lady’s Book, keeping the Serial Publications limit in place, leads to the following subjects:

The first and third subject (see image above) in the record for Godey's Lady's Book appear to be effectively the same. However, the "– Periodicals" extension in the first subject line fulfills an important function: it limits results to the periodical format, that is to say to serial publications. The subject "Women’s periodicals" by itself is also used to describe monographs that cover this topic. However, the function of the "–Periodicals" extension is virtually the same as the Serial Publications limit and hence not necessary as long as this limit is applied. 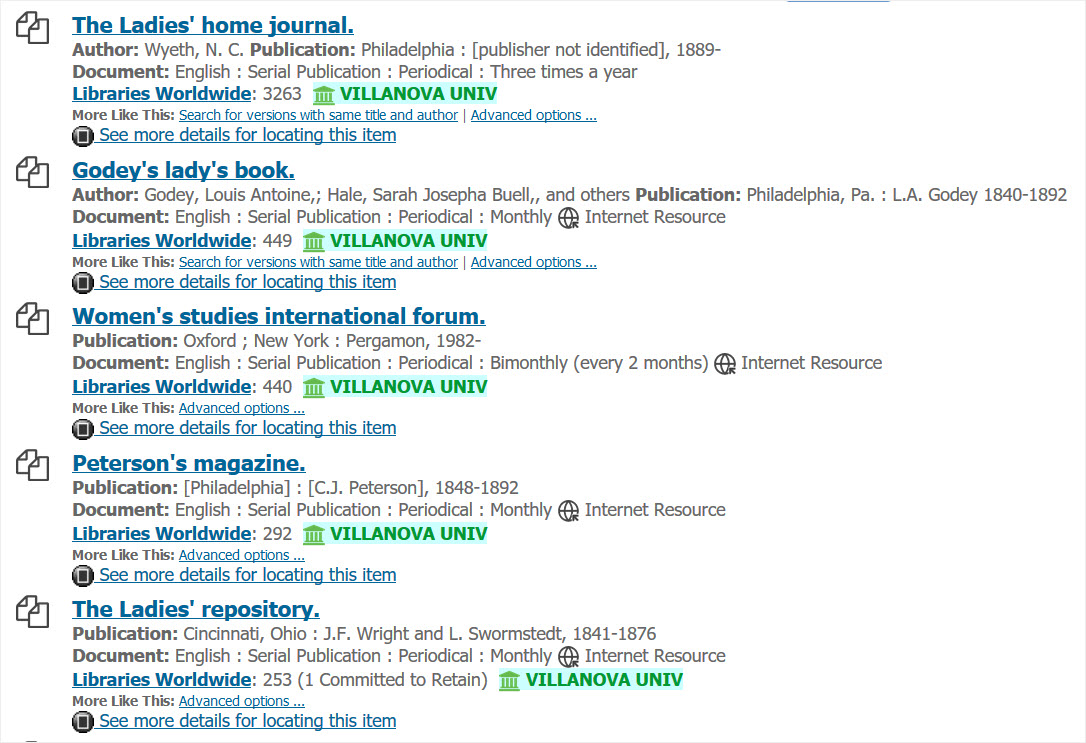 The highest-ranking result for "Women's Periodicals -- Periodicals" in WorldCat is the Ladies’ Home Journal which is still published today. The default ranking in WorldCat is by number of libraries who own a title. The screen shot of the results list shows that Ladies' Home Journal is held by over 3,000 libraries, by far more than any other women's journal.

The results list also includes Women’s Studies International Forum, which is an academic journal. The subject "Periodicals" does not differentiate between popular magazines and scholarly journals.

Peterson’s Magazines, published from 1848 to 1892 in Philadelphia, was very similar in scope to Godey’s as is evident from the subjects used in the record. The Ladies’ Repository on the other hand, published by the Methodist Episcopal Church from 1841 to 1876, was a response to Godey’s and intended for the "less worldly" Christian woman as can be learned from the detailed description in the WorldCat record for this magazine.

WorldCat results are presented in order of library holdings with titles held by the largest number of libraries listed at the top. This ranking reflects popularity and impact of a source to a certain extent. WorldCat records often include helpful information about individual sources including title changes, format availability, libraries with holdings, local holdings at Villanova University (see the Villanova Univ tag in the image above), and sometimes even a short publication history.

Directories and Bibliographies of Newspapers and Magazines

Another way to identify newspapers and magazines serving a particular audience is to consult a published directory or bibliography. These publications may include essays providing context and historical background.

The Library owns many of these finding aids, most of which can be found in the catalog via an advanced subject search. Use the terms "newspapers" or "periodicals" and "directories" or "bibliography" along with other suitable keywords describing a geographical location, religious affiliation, etc. Here are a few examples from the Falvey collection:

Open Access Directories and Bibliographies of Newspapers and Magazines

Formally published directories and bibliographies have the disadvantage that they are quickly outdated unless they are replaced with revised editions at regular intervals. Freely available online lists can be more current and crowd-sourcing can generate more inclusive and comprehensive lists. Wikipedia has an impressive number of index pages with lists of newspapers and magazines that meet certain criteria. Here are some examples:

These crowd-sourced lists are impressive by any standard but should not be expected to be perfect. The US Newspaper Directory maintained by the Library of Congress is a great option for newspapers published in the US.

There are too many open access archives for newspapers and magazines to list them all. While many of the free archives include only historical issues which are in the public domain, there are a few free archives that include current or recent issues. Below are some of my personal favorites.

Chronicling America: Historic American Newspapers
Search America's historic newspapers pages from 1860-1922 or use the U.S. Newspaper Directory to find information about American newspapers published between 1690-present. Chronicling America is sponsored jointly by the National Endowment for the Humanities and the Library of Congress.

British Newspaper Archive
Features digital copies of newspapers held by the British Library. Villanova University does not have access to the articles, but the search feature is open to all and permits the discovery of relevant articles which may be requested through interlibrary loan.

ZEFYS (Staatsbibliothek zu Berlin)
Permits free access to digital copies of a selection of German newspapers including complete runs of the three most important newspapers published in the former GDR.