Skip Navigation
This is an ARCHIVED page. The content on this page may be out of date.
You are exploring: Home > Research Services > Subject Guides > Philosophy > Encyclopedias, Handbooks and Companions
Navigation

Search the library for reference resources

Many reference articles can be found using the Articles & More search built into the library's website.

Once you've run your search, click on the Reference limiter on the right-hand side to show only electronically accessible reference articles. 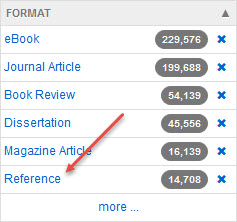 Use online encyclopedias, handbooks and dictionaries

The library also has a growing number of electronic reference tools for philosophy. The list below highlights some of the most popular.

Cambridge Companions to Philosophy, Religion and Culture
The Cambridge Companions series offers specially-commissioned collections of essays which are intended to serve as reference works for an inter-disciplinary audience of students and non-specialists. Addressing topics and figures ranging from Plato through Kant to Habermas, and philosophical movements such as the Scottish Enlightenment and German Idealism, this online collection contains over 1100 downloadable essays taken from the Cambridge Companions to Philosophy, Religion and Culture (more than 100 volumes). Each volume also includes a substantial bibliography and other elements such as glossaries and timelines.

Oxford Handbooks for Philosophy
Oxford's Handbooks series features scholarly review articles on many topics in philosophy. Each article reviews the current state of the literature and provides references to further reading. Toggle to the Books tab to see full handbook titles, or use the search box to find a specific topic.

Routledge Encyclopedia of Philosophy (REP) Online
Web access to the 10-volume print encyclopedia, published in 1998 with quarterly updates. Note that this encyclopedia uses British spellings, such as 'armoury,' 'colour' and 'theatre.'

Stanford Encyclopedia of Philosophy
An open-access encyclopedia started by the Stanford University Philosophy Department in 1997. The peer-reviewed entries are continually updated and contain bibliographies.

Encyclopedia of Philosophy (Gale)
The Encyclopedia contains more than 2,100 entries including 1,000 biographical entries on major figures in philosophical thought throughout history.. Among the many topics covered are African, Islamic, Jewish, Russian, Chinese, and Buddhist philosophies; bioethics and biomedical ethics; art and aesthetics; epistemology; metaphysics; peace and war; social and political philosophy; the Holocaust; feminist thought; and much more.

Oxford Bibliographies - Philosophy
A set of annotated bibliographies for a wide range of research areas and topics in philosophy. Bibliographies are curated by specialists and include generous contextual commentary in addition to descriptions highlighting the distinctive contributions of books and articles. Entries are linked to the library's catalog and journal holdings.

International Encyclopedia of Ethics (Wiley)
The encyclopedia comprises over 700 entries, ranging from 1,000 to 10,000 words in length, written by an international cast of subject experts. It provides clear definitions and explanations of all areas of ethics including the topics, movements, arguments, and key figures in normative ethics, metaethics, and practical ethics.

Encyclopedia of Bioethics (Gale)
Covers a wealth of topics on the ethics of health professions, animal research, population control and the environment. This work helps researchers to consider the impact of new scientific knowledge and its potential to harm or benefit present and future generations.

Encyclopedia of Philosophy and the Social Sciences (SAGE)
This encyclopaedia is purposefully interdisciplinary, the goal being to convey a clear sense of how philosophy looks at the social sciences and thereby delineating a detailed picture of how exactly the two are interrelated. Though the theme of this relationship has had its own history and received some academic treatment in the past, there are now fast-developing novel areas at the interface between philosophy and certain modern areas of social-scientific research spawning out of AI and Cognitive Studies and their sub-fields that demand a totally new and rather more complex perspective.

Encyclopedia of Aesthetics
Now explanded to include over 800 entries, the encyclopedia surveys the full breadth of critical thought on art, culture, and society, from classical philosophy to contemporary critical theory. Contributors as prominent as Arthur C. Danto and John Hollander provide descriptions of the major philosophers and artists whose works have impacted the study of Aesthetics; theories and trends such as futurism and postcolonialism; and concepts ranging from religion to obscenity.

New Dictionary of the History of Ideas

MIT Encyclopedia of the Cognitive Sciences

Encyclopedia of the Enlightenment